~5 min read | Published on 2019-08-27, tagged Exit-Scammed, General-News using 1145 words.
One Silk Road 3.1 admin claimed the other admins had stolen user funds in an exit scam. Another Silk Road 3.1 admin chimed in and claimed that the exit scam rumors were false. The truth is more complicated than it seems.
After receiving a lot of feedback on the matter, I can no longer conclusively say one side is right and the other side is not. Many have vouched for Walrus’ reputation. SR3.1 has a much more tarnished reputation.
HugBunter/SR 3.1 “Update”

The other admins informed HugBunter that the the opposite of Walrus’ warning is the actual truth. Other admins fired Walrus after he had stolen user funds. Then, after the other admins had fired him, he still had access to the server but not the main URL. The “working mirrors” are in fact Walrus’ own creations.
An Official update on the Silk Road subdread:
We closed the market to make an upgrades and are working on it still… celeste will be here shortly to sign a message (head admin).

During this, former Admin (Walrus) has stolen all user funds and move the platform onto another onion address. This is firstly a warning, if you use this cloned platform you will lose your funds! Walrus is attempting to exit scam by doing this and also made a post here earlier suggesting the Admins are exiting but this is a false.

The market will be online again when we are complete. This situation is far from ideal now but all stolen funds he has stolen have already been replaced from cold storage so your money deposited before the maintenance is completely safe.

An Update from Silk Road 3.1 on Current Events Involving the Marketplace

In a private conversation with Darknetlive, a post on Dread, and several posts on the Silk Road 3.1 forums, the administrator known as “Walrus” warned users that two (now former) administrators of the marketplace had “hijacked” the market’s v2 and v3 addresses, stolen roughly two Bitcoin, and accessed an out-of-date database used “to run phishing sites.”
With little information to go on right now, this post serves primarily as a warning that something out of the ordinary is happening with the marketplace’s administration. Darknetlive is relaying the warnings provided by Walrus, a Silk Road 3.1 administrator. The admin signed all messages and posts with his official key. The rogue admins allegedly attempted to sell the market to the admins of Nightmare Market and the admin of Empire Market. Darknetlive cannot confirm this with the Nightmare Market admin and has not confirmed this with the Empire Market admin.
Warning from Walrus

The announcement Walrus asked Darknetlive to post:
AlphaWaves/Celeste and Daray/Xonnek are hijacking the V2 and V3 urls so they can exit scam the market.

To protect the market, Daray was fired for stealing guest users orders along with AlphaWaves has been trying to sell the market to Empire and Nightmare admins (and other people who are currently nameless). More details and drama to follow if they do not stop what they are doing and pull down the V2 URLs and phishing sites.

Emergency URL for the market is

No funds have been lost but withdrawals are currently on hold until this drama is resolved and all vendors are aware of the new URL. AW and Daray have stolen approx. 2BTC since cleaning out the hot wallets this time but have run exit scams on Lunacy and SR3 before.

The market wallets have been changed and neither admin has any access now. No data has been compromised, although they have an out of date database they are using to run phishing sites (along with what will become of the V2 urls). Do not trust the old silkroad4 and silkroad7 URLs. Replacement V3 urls are coming soon and these will be secured. 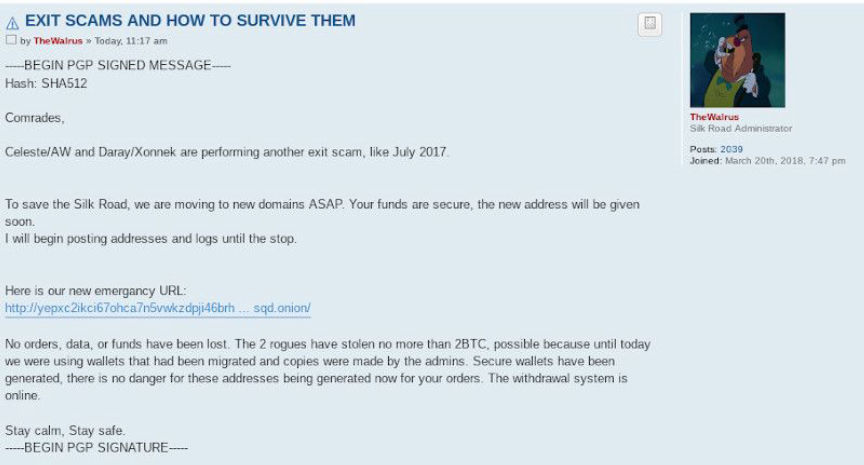 A post by Walrus on the Silk Road 3.1 forums

The admin also posted warnings on the Silk Road 3.1 forums and on Dread. Those warnings, minus the signatures, are listed below.
First Warning

On the Silk Road 3.1 forums
Celeste/AW and Daray/Xonnek are performing another exit scam, like July 2017.

To save the Silk Road, we are moving to new domains ASAP. Your funds are secure, the new address will be given soon.

I will begin posting addresses and logs until the stop.

Here is our new emergency URL:

No orders, data, or funds have been lost. The 2 rogues have stolen no more than 2BTC, possible because until today we were using wallets that had been migrated and copies were made by the admins. Secure wallets have been generated, there is no danger for these addresses being generated now for your orders. The withdrawal system is online.

First Update
On the Silk Road 3.1 forums
Your funds are secure, SR has new wallets and the is no possibility of AlphaWaves and Daray stealing deposited coins this way now. Now we must generate new URLS to protect ourselves.

On Dread
AlphaWaves and Daray are exit scamming again as they did in July 2017 with Lunacy and SR3. They have no server access but are taking control of the V2 urls after Daray/Xonnek was fired AGAIN for stealing guest users order withdrawals.

If they do not stop this, I will have no choice but to begin posting dox, logs and BTC addresses, AW private PGP key, call.php (code to call the admins cellphone) (i know right) of these scammers.

No buyers or vendor has lost ANY of the funds stolen by AlphaWaves or Daray.

Here is the new emergancy URL while we get everything fixed.

Funds stolen by these scammers is minimal and buyers and vendors will not notice any difference.

Accessing the marketplace via the links previously identified as the official market links is impossible. The landing page displays the following message:-----BEGIN PGP SIGNED MESSAGE-----Hash: SHA512We are performing upgrades and data migration to improve availability and functionality.The first stage of this will require the marketplace to be offline for an undetermined period of time. We will be back as soon as possible and all user funds are safe.We are extremely sorry for the inconvenience and will provide further updates within the next 48 hours.August 26th, 2019. (Current Bitcoin Block Height/Hash: 591888/00000000000000000013ab8926bc2cd7f5bce83bef594a05b2e11a6d9967375d)- -Celeste-----BEGIN PGP SIGNATURE-----iQIzBAEBCgAdFiEEx6qwJbcy+zHrGp+rfAaW1WvVzngFAl1kUOMACgkQfAaW1WvVznhBrw/+ONA3HuTQwnTHA+/kzXnX/QLUFD3p8IioSgBGF7pbzN9t8+s+hIueG6RdWy0jXgTx5XG6rp+ZwPGNUiK9Cde1OMqECsyJwqztVDcsaYOkD62l6+O1jH26gwk1UWod3EnDdNf2ULZKmQoqmKbfp4Tn9/M7n4jL3Ec8ANrZjFvCaCif8rEtiygCAALT3BNozZWEUowJaLz3PCzUWTFWFFfK/wQTT665o/poM/+c16n3DCBO+WHlQ7A/PIP/vZ4NoJU8BjkQgTVBCi5pmAeOeDLKaDylcUN49c836h4+fhCVeCMnp4osEG2FP+A6D69pBeDNwQ5jFKVLCsAVYWubNna2JwPaqR8iVeeLK7AJK3fQ3xn1ZchOQvU393kXdMxz5MbDJavyIZgADbmT9rd1bqfH2VxMey82ycidpTNpSePSDUeg1jrLjDKvZdjL36n3ZPhSRtaM4Cu5ZBLHvC9pxdtk1yZBcwbZ93GwF0p6YZtbkuls4Q4hz312vV9N8GyyJ5li5KJdegay2Q6s6imw3L76+d1vf6ieUTwYFYFvBWSItxPABwcPksZNmzLamTBtjWFOqUjetuQQbK2t4Jp5Ca0s3iqarOGpdiRtGyILStjT/ESDSrb7RcWKaUk43GyouvG4Xg/ZiU+uT5Yzw7u6ODE4eBSefScFgelxHzk68RQF1No==N6Lx-----END PGP SIGNATURE-----
By contrast, the so-called “emergency address” provided by Walrus works as expected. Updates will follow as soon as there is more to know.