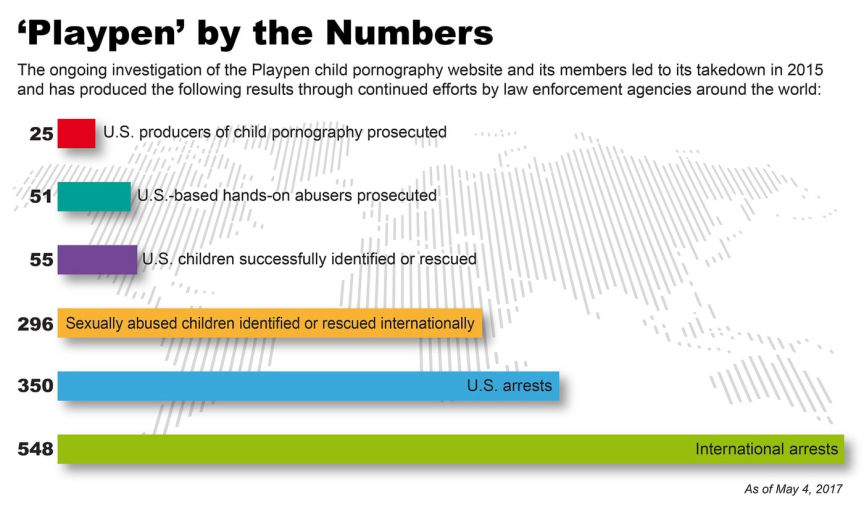 The FBI, during Operation Pacifier, investigated the users and administrator of a “child pornography” forum on the darkweb called Playpen. In early 2015, the FBI arrested the administrator of the forum and secretly took control of the site. Between February 20 and March 4, the FBI operated Playpen from its own servers in Virginia. Using one search warrant, the FBI essentially deployed a form of malware (NIT) that allowed the Bureau to harvest the I.P. addresses of some of the site’s users.
According to one criminal complaint, the FBI’s malware obtained the I.P. addresses of 1,300 users of the site. This information resulted in the identification of more than three hundred Playpen users in the United States and many more outside the country. Thompson’s I.P. address was one of the many collected by the FBI.

The user identified as Thompson had accessed Playpen on various days in February 2015. For instance, investigators determined that Thompson had logged into the Playpen website for approximately 11 hours and 23 minutes on February 21, 2015, and had downloaded child pornography images during the visit. During the investigation, the FBI subpoenaed subscriber information for the ISP associated with the I.P. address of the Playpen user identified as Thompson.
A judge signed a search warrant for Thompson’s residence on November 11, 2017. The FBI executed the search warrant on the same day. During a search of Thompson’s house, the FBI found evidence that he had downloaded child abuse content from Playpen, according to court documents.
Thompson pleaded guilty to one count of receipt of child pornography on January 24, 2020.
On October 27, 2020, United States District Judge S. Maurice Hicks, Jr. sentenced Thompson to 10 years in prison. The sentence will be followed by five years of supervised release.