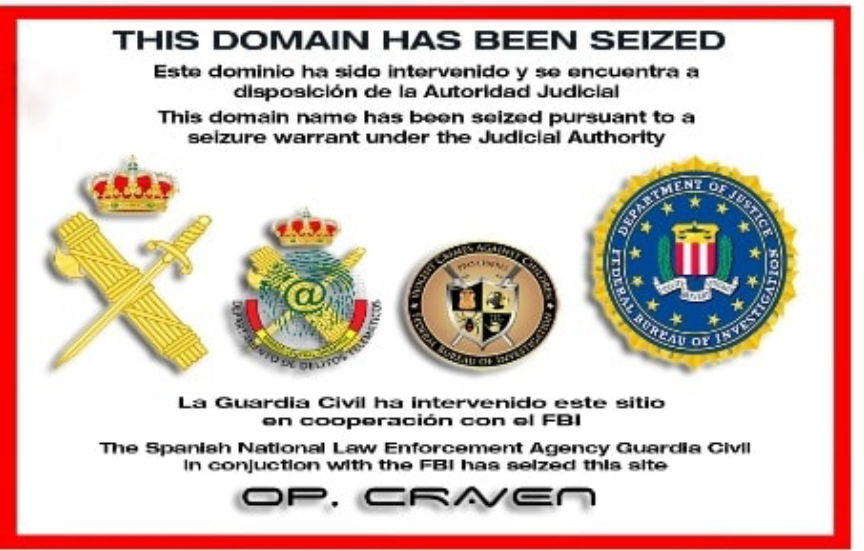 Original (in Spanish)
In a first phase of this operation, in February 2018, a person was arrested in Alicante, who was sentenced to 180 years in prison for the production and distribution of pornographic material with minors.
This complex investigation has culminated in three phases, all of them in collaboration with the FBI through an international Taskforce, through cyberpatrulation and the use of undercover agents
The Civil Guard, in the framework of the CRAVEN Operation, has seized a platform used by several groups of pedophiles for the so-called “capture of minors” on the Internet for sexual purposes.
The investigation began in 2016, after the Civil Guard received information from the FBI through the work group VCACITF (Violent Crimes Against Children International Task Force), which showed the use, by various groups of pedophiles, of an online video conference platform in order to get the participation of minors in activities of a sexual nature, recording these actions.
The success of this operation not only lies in the final closure of this platform, but also in the detention of a total of 31 people and the identification of 145 victims, mostly girls between 8 and 14 years of age.
The majority of these detentions and identification of minors have been carried out in the United States, although in Spain 8 minors have been identified and 3 persons have been arrested for their participation in these events. managed to block the platform used for the capture of minors.Tracking girls in different social networks
The different groups investigated used similar techniques , there being a clear distribution of roles and a totally organized way of acting. The two main roles that were distributed were those of “Hunters” and “Loopers”.
The “hunters” or hunters , were dedicated to the tracking of minors in different social networks, mainly girls between 8 and 14 years of age, focusing their objective on those that allow video broadcasting.
Once they chose their objectives, they sent links to rooms created specifically for this purpose on the intervened platform. There, in a coordinated way, the group encouraged the child to broadcast through their webcam, making requests that began as a game to win the confidence of the child.
During this phase, the “loopers” came into play . These people had video packages of other minors of both sexes, in which they appeared in different activities. Initially they used images in which the minors appeared in games of their own age and asked their victims to imitate their movements. Subsequently, they used videos of increasingly intense sexual content, including practices of particularly degrading content.
Through the previous process they obtained the participation of their victims in this type of practices, recording the activity in video and using them as a hook with other minors.180 years in prison for 38 crimes
The first registration made in Spain within the framework of this research was carried out in February 2018 in Alicante. The detainee has recently been tried, having been sentenced to 180 years in prison for 38 crimes of production and distribution of pornographic material with minors, highlighting the sentence itself the “degrading or humiliating character” of the material intervened.
The analysis of the material intervened during that first registration allowed to verify that this person exercised a leadership role within their group, establishing rules for the rest of the components, whose non-compliance could even lead to their expulsion.
The activity of this person in relation to the minors had a clearly ascending tendency. Initially I downloaded pedophile files through P2P networks . Subsequently, he switched to networks that allow greater anonymity, where he obtained the ideal material to pass himself off as a minor, getting to interact with dozens of them. This activity was developed over the years, progressively increasing the level of perversion of the activities requested of its victims.
In October 2018 a second registration was made in the town of Getafe (Madrid). The researcher was at that moment traveling in Southeast Asia, being arrested on his return at the Barajas airport. The analysis of the material intervened during the search allowed the agents to discover that they had used various fictitious identities and deception techniques to capture their victims, all of them minors.Website was administered from Spain
In addition to the platform that gave rise to the research, this person had used another of similar characteristics, designed specifically for this type of practice. The minors’ emissions were automatically captured in video, allowing their users to access them later, even if they had not taken part in the activity with the minor.
It was also possible to find out that the researcher used a game of initially innocent appearance , where he requested the minors to greet, take out the language or throw a kiss, receiving a different sum of points for each of these actions. As the game progressed, the minors had to undress and perform various behaviors of high sexual content. Among the material intervened, have been found dozens of videos of different minors resulting from the manipulation made with this game.
With one of the victims of the detainee in Getafe, the events took place in a more sustained manner over time. In this case, to obtain information from the minor, the researcher used several “phishing” systems , with which he obtained personal data of the minor and even obtained access to his accounts in various social networks and cloud storage systems.
The web page used was administered from Spain, whose responsible would have had knowledge of the use that was being made of its platform. Due to these facts, two domiciliary searches have been carried out.
The investigation has been carried out by the Department of Telematic Crimes of the Central Operative Unit (UCO) of the Civil Guard