~6 min read | Published on 2022-04-04, tagged General-News using 1368 words.
A Dread user believes they are under investigation after receiving packages that someone had tampered with and opened.
On March 28, the Dread user “ApexCipher2” posted a thread titled “Actual Photos of a DarkNet Pack being inspected by USPIS,” accusing postal inspectors of poking holes in packages shipped by a specific vendor. The user suspects that investigators are “trying to crush open the mylar pack, to get drug crumbs to spill out of the holes in the box, to test for drug chemicals via Reagent Analysis.” Based on previous investigations, a more likely scenario involves the use of holes in a package to obtain a visual confirmation of contraband. Law enforcement officers usually conduct reagent tests after obtaining a warrant and opening the package.
The theory seems dismissable if not for some of the other details provided by the poster, such as the fact that they have received several packages from the vendor with holes in them. At the start of the vendor’s career, the packages arrived without the holes described by the Dread user. “The point is, there [are] consistent holes, always in the same place on the packages. 4 holes, always the same size, always the same place on the box,” the user wrote in a comment.
Actual Photos of a DarkNet Pack being inspected by USPIS

So , I’ve received like 5+ packs from this one current vendor, and each and every pack, has these same 4 holes in the corners of the box.

Each hole is about the diameter/width/size of a Screwdriver. And through the hole, I could see the Mylar of my pack.

The boxes often come squeezed too, my idea is, the USPIS (USPS Postal Inspection) person, is trying to crush open the mylar pack, to get drug crumbs to spill out of the holes in the box, to test for drug chemicals via Reagent Analysis.

If you see unusually crushes packs, and or packs with several holes in the corners… it is a pretty clear indication to me that packs are being inspected.

Well what if the holes were there to start?

Answer: The holes were added after the pack shipped, the holes are clearly not a box design and are a hole puncture site.

What should I do if my packs have holes in them like this?

Answer: Don’t order from that vendor for a while and or don’t order any packs. (Possibility of either the Vendor specifically, or all your mail, being inspected.

Now, I’ve already opened these packs, so the box is slightly adjusted from its origional form. But you can still clearly see the holes in the corners, which were there before I opened the box. Notice how the holes are about the width of a screwdriver, and allow an inspector to see clearly inside the pack.

These photos are of 4 holes, the pack has 4 inspection holes. 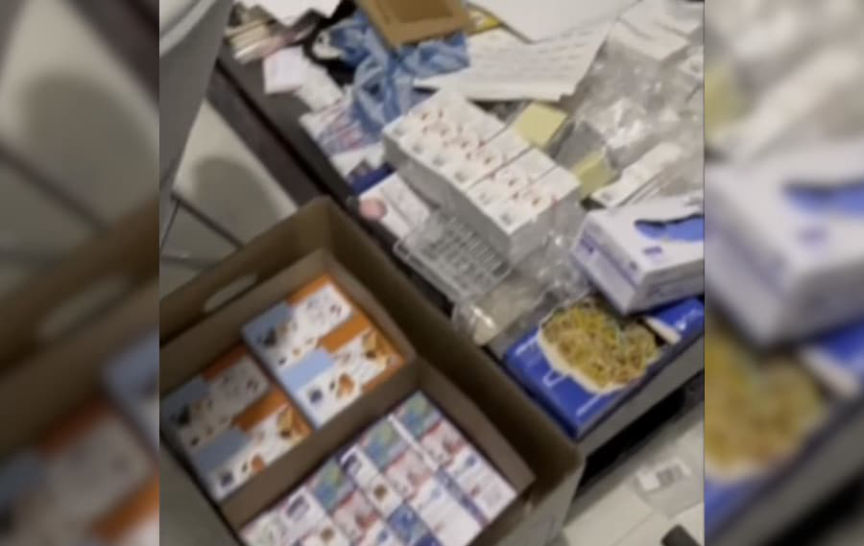 These are the supposed fed-holes.

Because the Vendor used a Visual Barrier (Mylar) the Postal Inspector couldn’t make a positive visual identification of drugs inside the box, and thus had to ship the package onward. I believe the Mylar may have also prevented an XRAY on the package.

If the vendor had only used a vacuum seal layer, I believe this pack would have been seized. Again, thanks to the Mylar layer, visual identification of drug contents couldn’t be verified, and the pack had to be allowed forward to my destination.

In the comments under the March 28 post, the user wrote, “I think the Vendor is being investigated more than I am because I get other DNM packs without any inspection holes.”
On April 2, things changed. The same OP posted a thread titled “Actual Photos of USPS Postal Inspection Part 2” which contained information about what the user believes to be evidence of further tampering. The user did not explicitly state that the package came from a different vendor, but it seems as if that is the implication.
Actual Photos of USPS Postal Inspection Part 2

The first post, was with a brown box, with tape used to hold it closed, which had holes punctured into it.

Todays package analysis, is about a more common package, the standard USPS Priority Mail flat rate box. The old golden, “Priority Mail” Small package. These Small Priority Mail Packages can easily hold 1OZ/28grams of cannabis, or mushrooms. They are durable, and have strong glue to seal them closed.

This package came from within the USA , to a USA address, it traveled from the east coast, to the west coast.

The clear indication of this pack being examined was 2 reasons:
[list=1]*The Package was crushed (similar to the first post), I know crushed packages can be accidental, or the crushed package can be intentional, to try to bust open a mylar bag and get drugs to spill out of the package.[/list]
<ol start="2">*The clear indication of package inspection was this: the vendor taped all the seams of the package, and one of the seams was cut, with a sharp object. This tape would stretch before it broke, and the tape wasnt stretched but was cut, probably by a boxcutter, knife, or similar sharp object.[/list]

The boxes side, was then able to be completely opened, the USPS Postal Inspector, could have dumped/taken all of the package contents out of the package, or replaced the item with a fake item, such as replacing real weed with fake weed, etc.

Then, the box was put back together but the seam wasn’t re-taped, because re-taping would indicate that the package was taped twice, once by the vendor, and again by USPS. In order to remain stealthier, the USPS Postal Inspector choose to not re-tape the package seam.

I was able to completely open the side of the package and re-seal it. This is what the USPS PI did, to see inside my package.

They didn’t seize my order though, thanks to mylar being used, and being unable to make a determination visually of any illegal internal conents.

Here are photos of 3 main ideas, first, the package taped and untampered with, how one side was left. Second, the tampered/cut side. Third, how the box can be opened and re-closed.

This constitutes a structural vulnerability in Priority Mail packages now, in my my mind. The Priority Small Package, can be completely opened on one side, and re-sealed. Tape, can indicate wether the package was opened however (of course, the FEDZ could attempt to re-tape the package to make it look like the origional tape was never cut to begin with.)

I can basically confirm the FEDZ are inspecting all of my mail now… so I’m pausing on placing any more orders for a few months. But again, None of my orders have been seized, and no controlled deliveries yet. I think the FEDZ are just gathering intelligence on me now, and also the Mylar layer prevented XRAY and Visual Analysis of the package true contents. Always use Mylar, vendors.

Photo of Sealed/Taped Seam, (One side of the box was cut, the other side left un-cut.):

Photo of Package with Cut Tape (this is how I received the package): 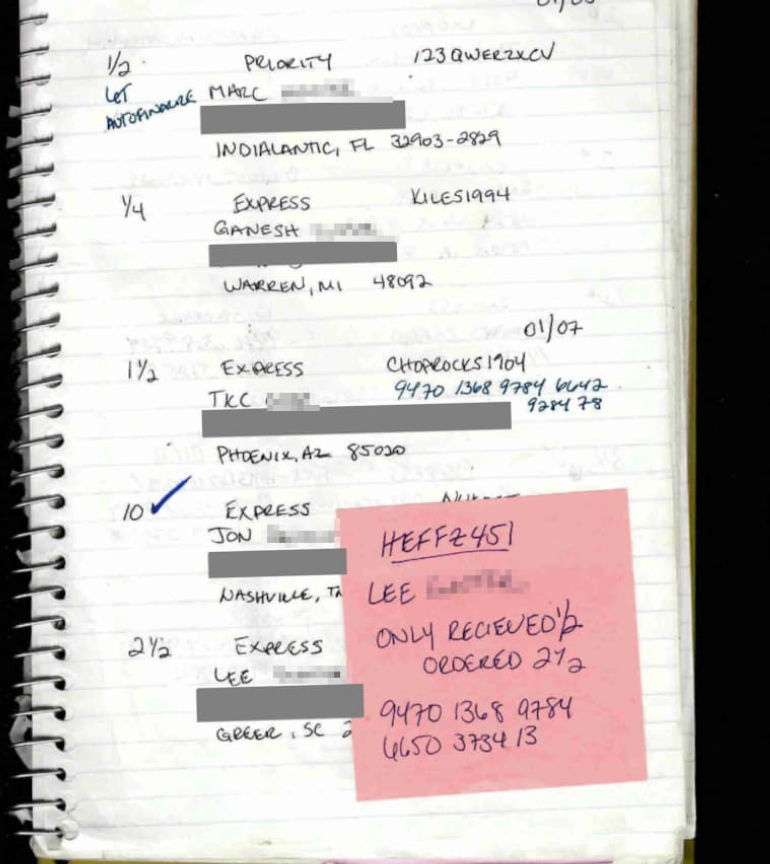 Photo of Access to Internals of Package after cutting tape, and un-folding the package, notice how the USPS PI could take out items, or see anything inside the package:

Photo of the package re-sealed, put back together:

I think I’m going to investigate the USPS PI, Im going to mail myself a pack, use CryptoStamps, typed addresses, make my pack look identical to a DNM pack, and include a GPS tracker. Im going to see where my package diverges into the inspection room, and perhaps include some sensor to trigger an alert, sent via Cellular Network, about when the package is opened.

Then, I can have the GPS Coordinates of the USPS PI/DEA/FBI Inspection building (at least, one of the buildings).

And know what stage along the shipping route the package was opened, and where it was opened (using GPS).

I’m annoyed at these FEDZ so I’m going to investigate the FEDZ with this Tracking Pack pack.

Is this real or is this stimulant induced paranoia? I do not care either as long as the user continues to document the investigation of the postal investigators.