DeepDotWeb Admin Talks About His Case from Behind Bars

~5 min read | Published on 2019-11-10, tagged Darkweb-Market, General-News, admin using 1232 words.
From behind bars in a French prison, one of the accused administrators of DeepDotWeb provided his side of the story. Throughout the interview he maintained that DeepDotWeb was nothing more than an ordinary news site that did more good than harm by allowing users to make informed decisions about the darkweb.
Tal Prihar, one of the two men accused of earning $15 million through the operation of DeepDotWeb.com, gave an exclusive interview to a news outlet in Israel. The interview was conducted through his attorney, Nick Kaufman. The original interview is in Hebrew. This article contains some of the relevant portions of the interview.
Background

DeepDotWeb was the first news website that focused primarily on news concerning the darkweb in general. The site covered everything from new onion services to law enforcement action against those onion services. They covered general drug busts linked to the darkweb as well as security and privacy news. Like most darkweb news sites, DeepDotWeb featured an index of darkweb marketplace links. According to the indictment filed by United States authorities, Prihar and his co-defendant earned more than $15 million through the use of referral links. 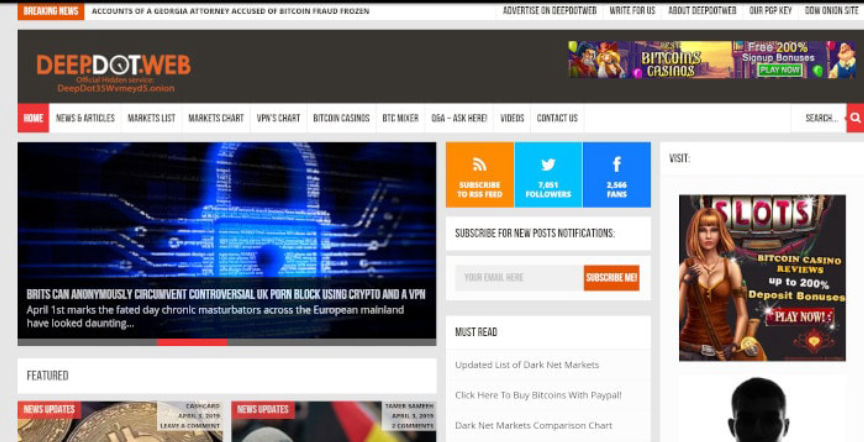 A Screenshot of the DeepDotWeb Homepage

The DeepDotWeb administrators are the first people charged in connection with the use of darkweb market referral or affiliate links under U.S. Code § 1956: Laundering of monetary instruments. Also known as money laundering conspiracy. In the interview, Prihar said that the case against DeepDotWeb is entirely unique; no other site administrators have been charged in connection with referral links to darkweb markets. He did not know he had even broken a law in the eyes of the U.S. prior to his arrest.
He is currently in jail in France where French law enforcement arrested him during a layover between Israel and his home in Brazil. The arrest was made in response to a request by United States officials; no charges have been filed anywhere but the United States.
The U.S. seized DeepDotWeb.com in May of this year.
In the interview, Prihar made it clear that he had not committed any crimes by publishing any of the content he had published. While this is obvious based on the charges, the United States government has used the DeepDotWeb case as a platform for targeting the content published by sites like DeepDotWeb. The FBI said they would make it their goal to “shut down websites like DeepDotWeb that facilitate the introduction of opioids and other illicit contraband into the United States.”
The Interview

Prihar: “I don’t know that any specific crime was ever committed just because of something I listed or posted, on the contrary,” Prihar said. “Our goal was to prevent crimes against personal and economic freedoms and try to minimize bodily and mental harm. [We did nothing] to convince or coax people into doing something they did not intend to do without us, for better or worse.”

“To be clear: we did not create the demand. Neither the guns nor the drugs. So if someone was going to buy a gun and kill people or buy drugs - they would do it regardless of us. The site was used in general to warn of dangers, poisonings, thefts, and to refer to places we believed to be the least harmful to those who had already decided to use them. We did not recommend and did not push. We never put up an advertised article or article to promote the use of one or another site, or any other illegal product.”
The interviewer asked about the alleged $15 million earned through the site:
Prihar: “There was no such amount. The amounts listed there for the use of links to illegal sites are absolute lies. We only linked to those sites. And we are accused of having these purchases we received a commission. That’s the whole charge: one section of money laundering conspiracy. Not selling drugs, no weapons, nothing. Anything else, it’s their explanation to prove the charges. "

Interviewer: So what was your agreement with the dealers?
Prihar: “Contrary to the accusations, the site never charged or agreed to a bribe in exchange for a listing. The terms were technical only and included security, reliability and damage mitigation parameters. We had no agreement with anyone. Our requirement was: meet minimum security standards, do not steal, avoid selling material that could harm someone, be attentive to the comments and do not create unnecessary drama.”
“The site never sold a sponsored article. All the product (technological) reviews it provided were to support the product, and never for a fee. Legal and illegal factors, and you won’t find anyone who can tell you that we published something for a fee that we did not agree to [publish regardless].”

Interviewer: What did you do with all the money?
Prihar: “What money? The site earned through different and completely legal marketing channels such as Bitcoin gambling websites, anonymous VPN software, and Bitcoin exchanges. Any legitimate revenue received from this site or from other sites we operated entered the bank. And we paid taxes. Everything else has gone to lawyers. The Americans intend to take what is left of my income”
Interviewer: It is alleged that you deposited some of the money in accounts abroad and in Israel.
Prihar: “Who claimed […] we deposited something illegal in Israel? We have a company that has been operating in Israel for many years in the marketing field. Any income from it was deposited in Israel and taxed on it and everything is legal, we are not charged with any offense in Israel…”
The interviewer asked about the claims that DeepDotWeb warned users about law enforcement actions involving the darkweb.
“The claim that we reported enforcement activity is a malicious distortion of reality […] intended to color us as outlaws. The reality is that we reported it like every other cyber news site in the world reported when the source of the information was publications by the enforcement agencies themselves. Did we add the headline ‘You should be careful?’ - Obviously!”
Interviewer: Did you not know that you have a extradition order?
Prihar: “No. I knew an investigation was underway. Their interrogations were about the same as an elephant in a china shop. In general, to this day, I really don’t know that we have committed any offense.”
He explained that law enforcement are taking pride in the DeepDotWeb shutdown for no reason at all; since he was unaware that the United States viewed his activities as a crime, he had everything in plain sight.
On the topic of the prison in France where Prihar is being held
Prihar: “Most people are crammed into a room of 3 - 4.5 square meters. Three people 20 hours a day. My cell is decorated with many paintings and inscriptions of ISIS or Nazis condemning the Jews. The rooms are full of blood-sucking insects, and my whole body is covered in bleeding bites. The yards are full of rats and there are many cases of tuberculosis and disease. I experience antisemitism here, lots of loneliness, sadness, concerns and concern for the family. When I was arrested, one of the policemen boasted: ‘We caught another Jew who took money’, that is about the recurring motif of the French towards me and all the foreigners, like a terrorist. Since I was arrested, no Israeli official has visited me. […] The stress is unbearable.”
The complete interview is available here: yediot.co.il
The Indictment is available here in PDF form: DDW Indictment