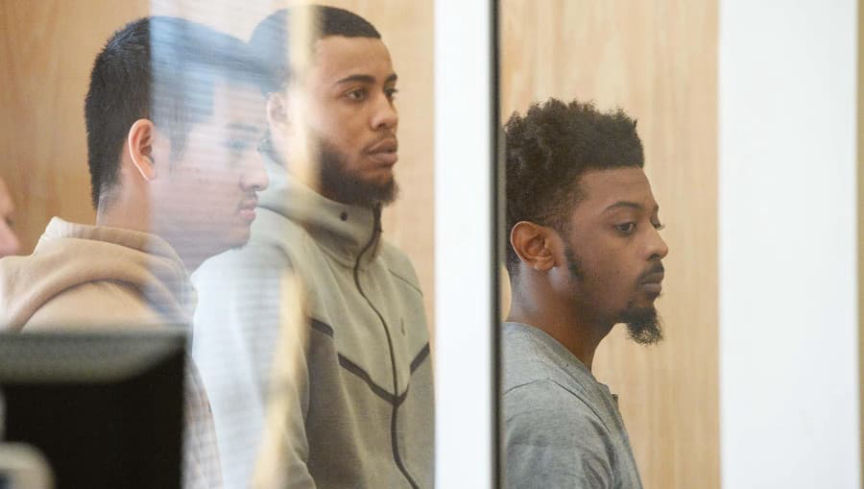 Steven McCall, 26, pleaded guilty to conspiracy to manufacture, distribute and possess with intent to distribute MDMA, Ketamine, and Alprazolam.Summary
McCall and co-conspirators Binh Thanh Le and Allante Pires sold various drugs, including cocaine, MDMA, Ketamine, and Xanax, on the darkweb. The trio sold through a vendor account on Wallstreet Market and Dream Market under the username “EastSideHigh.” 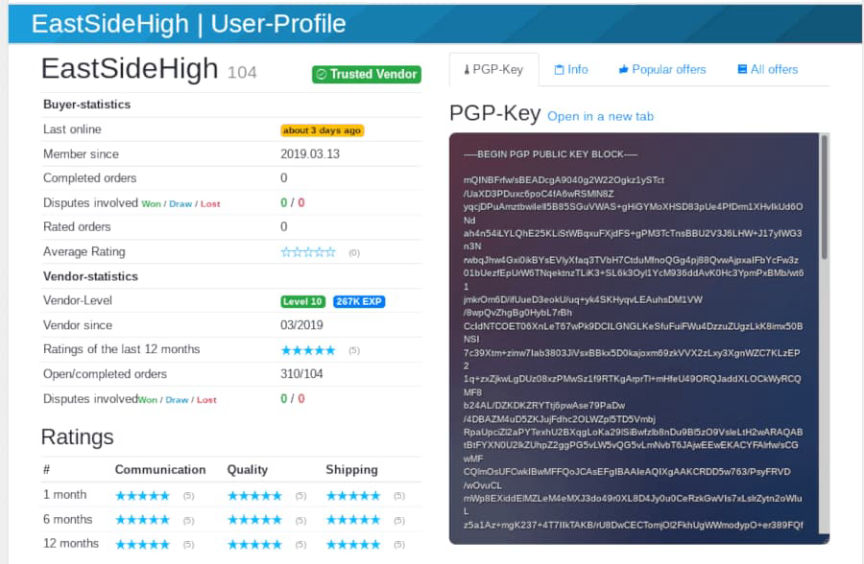 Le, the ringleader, was sentenced to eight years in prison on March 10, 2022, for the charges of conspiracy to manufacture, distribute and possess with intent to distribute MDMA, ketamine, and alprazolam. A judge ordered Le to forfeit more than 59 Bitcoin (currently worth more than $1.2 million), and $114,680 in cash, among other things.
On June 3, 2022, Pires pleaded guilty to the same charges. His sentencing hearing was scheduled for September 8, 2022. 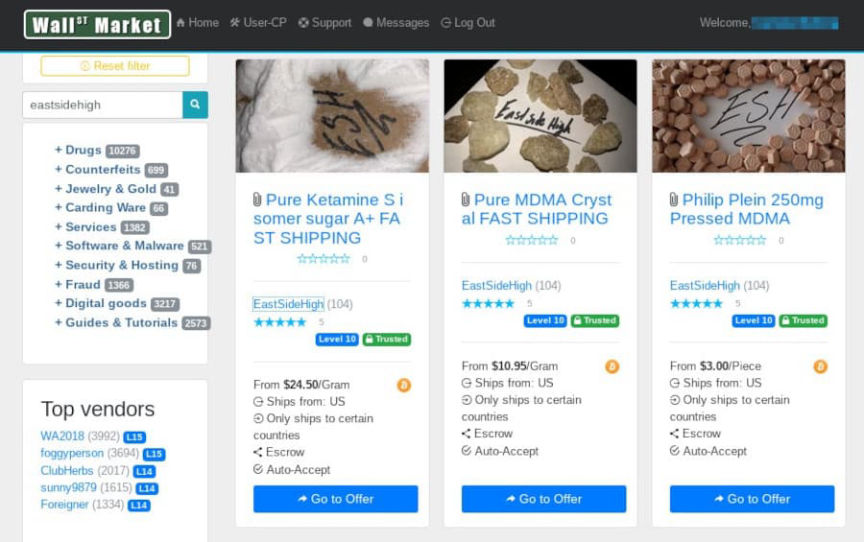 Some of the products advertised by the vendor on Wallstreet Market

During the investigation, law enforcement officers seized more than 19 kilograms of MDMA, almost seven kilograms of ketamine, nearly one kilogram of cocaine, more than 10,000 counterfeit Xanax pills, and over $114,000 in cash. At an office space in Stoughton, police found packages of drugs, [a laptop signed into the EastSideHigh account](/post/ecstasy-and-ketamine-vendor-eastsidehigh-busted-in-massachusetts/ ‘Ecstasy and Ketamine Vendor “EastSideHigh” Busted in Massachusetts') on Wallstreet Market, and McCall. McCall was wearing a respirator and latex gloves when police arrested him at the office space.Background
A background on the case from one of the previous EastsideHigh articles on Darknetlive:
In February 2019, an undercover Homeland Security Investigations (HSI) agent notified Postal Inspector Gina Gentiluomo that EastSideHigh wanted to exchange Bitcoin for cash. The HSI agent communicated with EastSideHigh through a secure messaging application about the exchange. Inspector Gentiluomo then contacted the vendor, posing as the money launderer.
Hotel Meeting

In March 2019, Inspector Gentiluomo and another postal inspector (UC) met with Le at a hotel. The parties agreed to exchange $200,000 in Bitcoin in a wired hotel room. After Le had sent the Bitcoin to the address provided by the feds, the second postal inspector pretended to be having problems with his cellphone. He asked Le to open the wallet application on his phone and verify that the transaction had been completed. Le handed his unlocked phone to the postal inspector. After the postal inspector had possession of Le’s phone, postal inspectors and state police entered the room and detained Le.

After being advised of his rights per Miranda, Le voluntarily provided law enforcement officers with his password.

After detaining Le, other officers approached Pires’ Mercedes, which was still in the hotel’s parking lot. They detained Pires and asked him about the keys on his key ring. Pires identified one as the key to the office space in Stoughton. Other law enforcement officers executed a search warrant at the office space where they encountered McCall wearing a respirator.
The Search in Stoughton

Inside the office space, the police found 11 pounds of ketamine, 5,000 grams of ecstasy pills, packaging materials, two digital scales, two heat-sealing devices, a pill press, and $114,700 in cash. They also found a laptop with the EastSideHigh profile on Wallstreet Market on the screen. The police seized 18 kilograms of MDMA and more than $200,000 in Bitcoin by the end of the investigation.

Le pleaded guilty to conspiracy to manufacture, distribute and possess with intent to distribute MDMA, Ketamine, and Alprazolam. On March 10, 2022, a judge sentenced Le to eight years in prison and three years of supervised release. The judge ordered Le to forfeit more than 59 Bitcoin, $114,680 in cash, the proceeds from a 2018 BMW M3 sale, a pill press, and a currency counter.

The charge of conspiracy to manufacture, distribute and possess with intent to distribute MDMA, Ketamine, and alprazolam carries a mandatory minimum sentence of three years in prison and a maximum of 20 years in prison.
[em]Brockton Man Pleads Guilty in Sophisticated Drug Trafficking Conspiracy that Operated Using the Dark Web[/em] | archive.is, archive.org, justice.gov