~3 min read | Published on 2019-07-25, tagged Exchange, General-News, Indicted using 705 words.
A federal grand jury indicted a Monmouth County, New Jersey, man for operating a an unlicensed Bitcoin exchange called “Destination Bitcoin” through which the defendant converted more than $2 million dollars of United States currency into Bitcoin. He faces up to five years in prison.
Andrew Grammatikos, a Special Agent of the Internal Revenue Service, Criminal Investigations (IRS-CI) filed a criminal complaint in February 2019 wherein he detailed Green’s alleged criminal activities. The criminal complaint and grand jury indictment accused Green of committing the same crime: operating an unlicensed money transmitting business.
According to the complaint, Green opened a business in September 2017 that offered to make it “possible to begin investing in Bitcoin at increments everyone can afford by allowing fractional bitcoin options.” The company, Destination Bitcoin, claimed to give “every customer the ability to purchase Bitcoin in small quantities no matter how expensive the price of 1 Bitcoin becomes.” 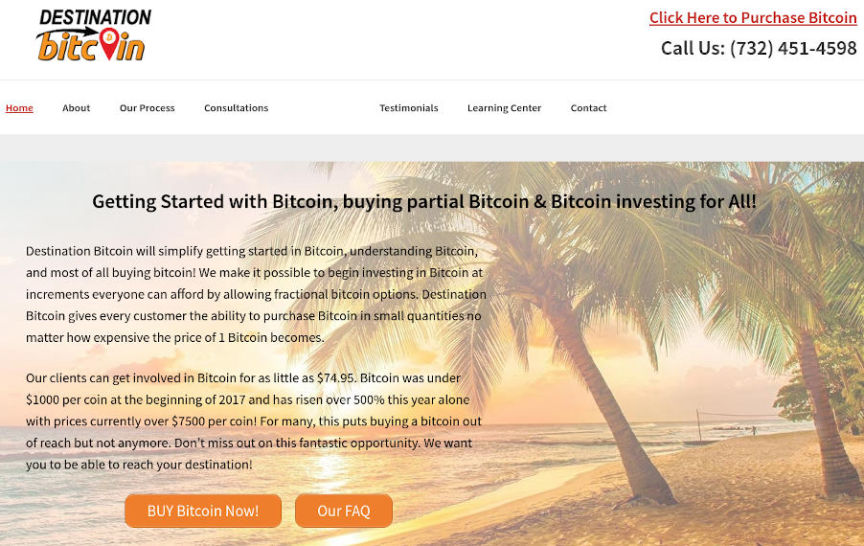 The IRS opened an investigation into Destination Bitcoin in 2018. They pulled the site’s financial records with banks in New Jersey. Green had listed his home address as the business’ physical location, making identification simple for investigators. Even if he had used a different address on the website, Green had registered his business with the state of New Jersey using his real information.
As part of the investigation into Green, the IRS subpoenaed several banks for information on accounts used by Green and his business. Records from different banks revealed that Green’s accounts received regular cash deposits and that Green turned around and spent the money at a Bitcoin exchange. One subpoena returned information summarized in the following section of the criminal complaint:
Pursuant to subpoena, law enforcement obtained records from [the first bank] regarding an account held by GREEN (account ending 8588) (“the 8588 Account”). An analysis of those records revealed that between on or about September 1, 2017 and on or about January 23, 2018, [Green’s account] received approximately $1,417,000 in cash deposits and wire transfers from various individuals located in the United States and at least one individual in Queensland, Australia. Shortly after the funds were deposited, GREEN transferred them to an account held at by the Exchange. During this time period, [Green’s account] was used to purchase approximately $2,017,000 in Bitcoin through the Exchange.

In early 2018, the unidentified exchange contacted Green about the funds he had been depositing into the exchange account, information returned from a subpoena revealed.
Green responded to the email from the exchange on January 17, 2018. He stated that he was employed by a consulting/ sales company called “Tomorrow’s Office.” He also attached a paystub and said that he was a “large trader” who traded his own income. The exchange closed Green’s account after he failed to provide enough information regarding the source of his deposits.
Between December 2018 and February 2019, the IRS-CI conducted a series of undercover transactions with Green. They mailed Green cash in exchange for Bitcoin. Green took 5% of the transactions as his fee for the conversion of funds. After successful exchanges of cash, the IRS-CI asked Green if he could wire money to Green’s bank account. Green objected, stating that he preferred cash. The undercover agent convinced Green to accept a wire transfer by claiming to need bitcoin urgently.
In February, the undercover agent sent a text message to Green stating that he wanted to purchase $12,000 worth of Bitcoin. The agent convinced Green to conduct the transaction in person. The agent also “told Green that the person who would be delivering the cash purchases Adderall from [the undercover agent],” according to the complaint.
They met and exchanged funds:
On or about February 7, 2019, a member of law enforcement acting in an undercover capacity (“UC-2”) met GREEN at a location in Wall Township, New Jersey. UC-2 provided GREEN with $12,000 in US currency in a green plastic bag. GREEN counted the money in front of UC-2, confirmed the amount, and left the meeting place with the currency.

Green provided the undercover agent with $10,000 in Bitcoin the following day ($12,000 less Green’s 10% fee for the transaction).
The charge of operating an unlicensed money transmitting business carries a maximum penalty of 5 years imprisonment and a $250,000 fine.
Source: DOJ - Monmouth County Man Charged With Operating An Unlicensed Bitcoin Exchange