~5 min read | Published on 2022-12-19, tagged Guides, I2P using 1029 words.
The Invisible Internet Project (I2P) is an anonymous network layer (implemented as a mix network) that allows for censorship-resistant, peer-to-peer communication. Anonymous connections are achieved by encrypting the user's traffic (by using end-to-end encryption), and sending it through a volunteer-run network of roughly 55,000 computers distributed around the world. Given the high number of possible paths the traffic can transit, a third party watching a full connection is unlikely. The software that implements this layer is called an "I2P router", and a computer running I2P is called an "I2P node". I2P is free and open sourced, and is published under multiple licenses. 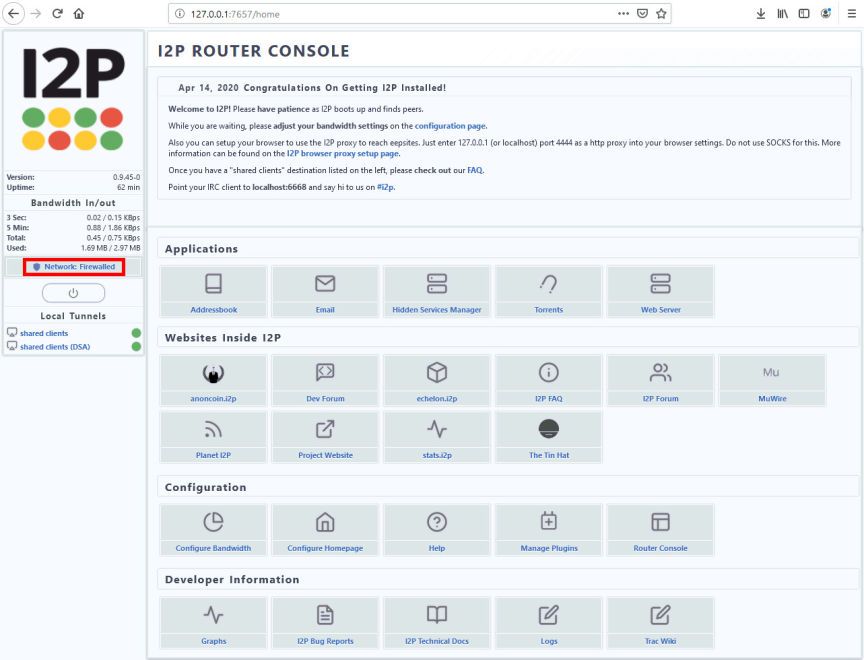 I2P is a decentralized P2P network, so its operation relies on its community. It encrypts your traffic with end-to-end encryption and routes it via a volunteer-maintained network. This network is scattered all over the globe and consists of over 50000 devices.

With your traffic dispersed around the world, it will be very difficult to spy on.

I2P is a highly secure network. Here’s why:

There are a few key differences between I2P and Tor; chiefly, it is a closed network that cannot access outside sites (it can only access sites that end with “.i2p”). This is unlike Tor, which can be used as a regular web browser in addition to accessing “.onion” sites. Also unlike Tor, the I2P network is peer-to-peer and relies on each user to act as a node. It wraps transmitted data in multiple layers of encryption that travel in unidirectional tunnels through random intermediaries, which makes it particularly hard to profile its users. This is in stark contrast to Tor traffic, which has an easily-distinguishable fingerprint.

Other differences include the fact that I2P uses a method of routing known as Garlic Routing (as opposed to Tor’s Onion Routing), which means that data packets are grouped and encrypted together, breaking off at the correct destination per their delivery instructions. This means there is no way for observers to know how many layers are being used, and more importantly, no way to read what is being sent in the data packets. I2P also uses its own API protocol and does not rely on SOCKS, unlike Tor.

In general, I2P is considered to be more secure than Tor. While it is true that your IP address is displayed in the list of nodes connected to the network, there is no way to know what sites your are visiting, and this situation can be remedied by connecting to I2P through a VPN, through Tor, or even a combination of VPN and Tor. It does not work with Tails, however, as it requires special configurations in order to operate.

Potential vulnerabilities. In 2014, I2P experienced a zero-day vulnerability and exposed around 30,000 users. A 2017 study later revealed that a variety of other I2P vulnerabilities were also exploitable;

First, you will need to install the I2P software, which is available for most major operating systems, including Windows, Mac OS X, Linux, and Android. It is not available for iOS, however. The latest release for Windows, I2P 9.5, is named “Easy Install”, as it does not require additional downloads in order to use. This version is recommended for Windows 10 users. The installation process is very easy and only requires a couple of inputs from the user (preferred installation language and file path for installation). If you are installing a different version or using a non-Windows operating system, you will also need to download and install Java.

I2P must be started before attempting to access its network (just like any other application) and then it can only be accessed in an I2P-configured browser. To configure your Firefox browser properly for I2P access, go to Settings and then Network Settings, down at the bottom, then do the following:

The installation can be a little difficult for new users, but you can find all the info you need on I2P official site.

In general I2P it's a poweful tool for those who seek to connect into darknet markets at the moment, since tor its getting massive ddosed. It can be a bit slower than the normal web browsing experience. Also like Tor, it does not render its users totally anonymous. It does, however, do a great job at helping users protect their privacy, and many would say an even better job than Tor.