Freedom Hosting Admin has been Extradited to the US

~4 min read | Published on 2019-03-26, tagged Extradited, Website, admin using 866 words.
Eric Eoin Marques, the alleged admin and owner of the former darkweb hosting service “Freedom Hosting,” has been extradited to the United States to stand trial for a number of child pornography distribution and advertising crimes.
Previous Article About Marques
The Extradition Announcement

Irish authorities extradited a dual national citizen of the United States and Ireland to the United States to face federal charges that he allegedly advertised and distributed child pornography on the dark web.
The extradition and federal charges were announced by Assistant Attorney General Brian A. Benczkowski of the Justice Department’s Criminal Division, U.S. Attorney Robert K. Hur for the District of Maryland and Assistant Director Robert Johnson of the FBI’s Criminal Investigative Division. 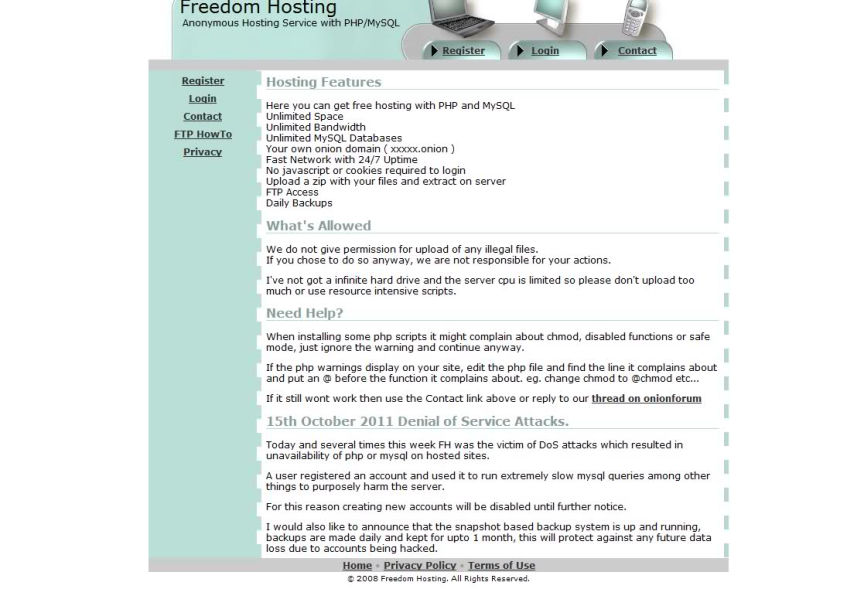 Eric Eoin Marques, 33, arrived in the United States on March 23, and had his initial appearance today before U.S. Magistrate Judge Timothy J. Sullivan in U.S. District Court in Greenbelt, Maryland. An amended criminal complaint was filed on Aug. 8, 2013, and unsealed today at Marques’ initial appearance.
Marques is charged with:


At the hearing, U.S. Magistrate Judge Sullivan ordered that Marques be detained pending trial or a detention hearing scheduled for March 27, 2019 at 11:30 a.m.
“Child exploitation sites on the dark web present a grave danger to children and unprecedented challenges to the world’s law enforcement agencies,” said Assistant Attorney General Benczkowski. “The complaint unsealed today demonstrates the Department’s commitment to pursuing those accused of serious child pornography offenses wherever they may hide on the web and in the world, and to seeking justice for the countless children that are victimized by those who facilitate this horrendous conduct.”

“Criminals cannot hide on the dark web or in foreign countries,” said U.S. Attorney Robert K. Hur. “We will find them and bring them to justice. We are grateful to Irish authorities for their assistance to bring Eric Marques to the United States to face these charges.”

According to the amended criminal complaint, between July 24, 2008 and July 29, 2013, Marques conspired to advertise and distribute child pornography, and aided and abetted the advertising and distribution of child pornography, by allegedly operating a free, anonymous web hosting service (AHS) located on the dark web, an area of the internet that is only accessible by means of special software, allowing users and website operators to remain anonymous or untraceable. The AHS allegedly hosted websites that allowed users to view and share images documenting the sexual abuse of children, including the abuse of prepubescent minors, violent sexual abuse, and bestiality.
According to the amended criminal complaint, as of July 12, 2013, one site hosted on the AHS reported that there were almost 1.4 million files that were uploaded and accessible by individuals who visit the hidden service. During 2012 and 2013, FBI special agents and employees using computers in Maryland downloaded more than one million files from that website. As part of the investigation, those files were reviewed and nearly all of the files depict children who are engaging in sexually explicit conduct with adults or other children, posed nude and/or in such a manner as to expose their genitals, in various states of undress, or depict child erotica. A substantial majority of the images downloaded by the FBI depict prepubescent minor children who are fully or partially nude or engaged in sexually explicit conduct.
The complaint alleges that during the time of the conspiracy, the IP address associated with the AHS was assigned to a computer server associated with and exclusively used by Marques.
A criminal complaint is not a finding of guilt. An individual charged by criminal complaint is presumed innocent until proven guilty beyond a reasonable doubt in a court of law.
This case was brought as part of Project Safe Childhood, a nationwide initiative launched in May 2006 by the Department of Justice to combat the growing epidemic of child sexual exploitation and abuse. Led by the U.S. Attorney’s Offices and the Criminal Division’s Child Exploitation and Obscenity Section, Project Safe Childhood marshals federal, state, and local resources to locate, apprehend, and prosecute individuals who sexually exploit children, and to identify and rescue victims. For more information about Project Safe Childhood, please visit www.justice.gov/psc. For more information about Internet safety education, please visit www.justice.gov/psc and click on the “Resources” tab on the left of the page.
The investigation was conducted by the FBI Violent Crimes Against Children Section and Legal Attaché London, Irish law enforcement authorities, An Garda Síochána and EUROPOL. The Department of Justice’s Office of International Affairs provided significant assistance in bringing Marques to the United States and procuring foreign evidence during the investigation.
The case is being prosecuted by Deputy Chief Keith A. Becker and Trial Attorney Ralph Paradiso of the Criminal Division’s Child Exploitation and Obscenity Section and Assistant U.S. Attorneys Kristi N. O’Malley and Thomas M. Sullivan of the District of Maryland.
Source: Alleged Dark Web Child Pornography Facilitator Extradited to the United States to Face Federal Charges
The Criminal Complaint

The redacted criminal complaint was made available by the United States government following the publication of the charges filed against Marques. The PDF file is available at the following URL