~3 min read | Published on 2018-10-10, tagged Arrested, Darkweb-Market, General-News, admin using 627 words.
According to the National Unit Against International and Organized Crime, the administrator of the Swedish darkweb market “Flugsvamp 2.0” has been arrested for several drug trafficking offenses. Little information, other than what one news outlet published, has been made available at this point.
“Investigators have requested legal assistance in some 30 countries.”
About Flugsvamp 2.0
Rough translation of the article from Sydsvenskan:
A man has since been arrested last Friday for serious drug offenses. He allegedly administered Flugsvamp 2.0. The site has been on the so-called darknet, a hidden part of the internet, and [the original Flugsvamp] closed down in late September.

“Flugsvamp 2.0 is built so that sellers and buyers themselves register, and then you have a person who manages the page,” Anna Svedin, chamber prosecutor at the National Unit against International and Organized Crime, said.

Specialists at the police’s National IT Crime Center are responsible for the investigation - which is ongoing.

“A prosecution is very far ahead, it is a very big investigation,” says Anna Svedin.

sydsvenskan: Are there more suspects?

“I do not want to comment on that,” Anna Svedin said.
sydsvenskan: But nobody else has been arrested?
“I do not want to say anything more relevant to the investigation.”
According to Sydsvenskan, the police have conducted the extensive investigation for more than a year, including telephoning and tracking against the 26-year-old.
Anna Svedin has made a request for detention of the suspected man of SEK 19.6 million.
“We calculate a profit on a criminal activity. And, as evidenced by the arrest, it is for over three years, says Anna Svedin. It’s a very big matter that involves a number of countries. What kind of legal aid is it, I do not want to go into, the prosecutor said.”

The site is online but the forum is not. This message is displayed when loading the forum’s homepage:-----BEGIN PGP SIGNED MESSAGE-----Hash: SHA512Servern Ã¤r onÃ¥bar fÃ¶r tillfÃ¤llet. Vi undersÃ¶ker det hela. FÃ¶r nÃ¤rvarande ingen ETA pÃ¥ nÃ¤r FS kan tÃ¤nkas rulla igen.Backup finns.Mvh,Staff-----BEGIN PGP SIGNATURE-----Version: GnuPG v1iQIcBAEBCgAGBQJbC9/rAAoJEJo3dOdBmq8txD4P/2xdoOA/8SOWm83fqkMmRKQGWe9tMzayvJc3UyffIYIzNIo6NDtxKzPKuNEkmx4aCHrE7dT5j8uYCcu173+BMMKCbpFnRR9ou0OOabAHf/TbqdCfhRK9+qkqLNr1MM0NrhZeagOPzrojQNYm5+4cDG5UG3JA6hDM8zTDQ4IbBw4ZvJZ43O72bOQTdgJa47IwQy4m0jUfuqt9g6j0UUnD86lmw31cAD5Es2WMlJK5aWaIzyZzqGO9b127X114JYdwPhbn2a+Iw1CNa5Kxi6KdfRDRPhTa3eRjABq47XCK5wEhYf8vWD/s5Ggi/u2HOiP3ZtrS+/V4+x8uzm2mbZOYgIkT7LU2b5cmIxNl3gQvNV+jt9s4LhSxi82BG7iu0VU73W9Rhlx5I4r9lfhT3TrL6mTD3LceBLIzlA8LVf81fWsezCYTPRQCqiB9do8xkt3OKIMjF302OewUyRc1PZdtEdO1aNbk8uQgaqLfZlv/eSEld58oU/7iEZ+y3gW9GY20R3T3jidClzvkSUbYHI99kEUFVjOcLQTfN3R8ohUE9qiKH8ZgFfPqbg28OBoMaMSieKk8Qx+rBXdMFMul4MCbPMxUX3lv1xVVwGYrfuMYKiolN1CYUE2PIXN+d9BQgRL1Jt9+ogiRJSSwL/pA0OiEOkTrcRy4NJA9ZSDTs9KDw6bq=QC36-----END PGP SIGNATURE-----
The signature does not verify.Admin vs. Vendor
From a forum thread on the topic:
The time when this person was arrested coincided well over time when the admin on [Flugsvamp 2.0] disappeared, but it could be a coincidence. 20 million in 3 years is a little bit much for a random seller.

Some members are questioning whether or not the 26-year-old was the actual admin vs. a high profile seller.Court Information
RIGHT: Councilor Carl Rosenmüller
SCORER: Tingsnotarien Matilda Sanfridson
PARTIES

CAUSE: Extremely crude drug offense and more; now question about detention and attachment
The target is called on and the presence is checked. The lawyer Kinora Awrohum gives in substitution power, car. 13. District Court states that the designated public defender is present. 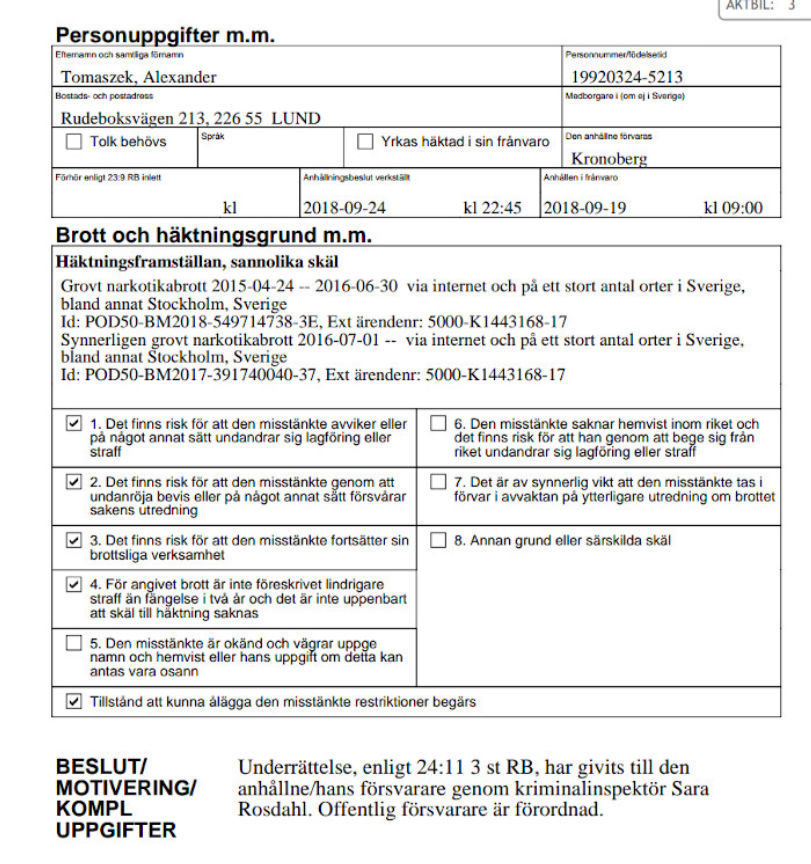 Deciding to take items in storage
COB TM426497-18
AFFECTED PERSON: A.T, 19920324-5213
Gross drug abuse 2015-04-24 - 2016-06-30 Via the internet and in a large number of places in Sweden, including Stockholm, Sweden
Id: POD50-BR2018-549640289-8C, Extender Number: 5000-K1443168-17
OBJECTIVE Other (other reason): Enforcement pursuant to Section 6 drug offenses (1968: 64)
DECISION/REASONS
A.T. is reasonably [suspected to be guilty] of the above crimes and it may reasonably be feared that A.T. by deviating or by evicting property or otherwise will avoid paying that amount which can be assumed to be condemned because of the crime.
Place of action: Stockholm
Place of storage (if other than above): Police Office, Polhemsgatan 30, Stockholm
Claim (for which property is detained): SEK 19.6 million
Property taken into storage: Cash amounting to a value about a total of 509,000 kr in a variety of currencies.
An interim request for attachment has been made
District Court of September 27, 2018