~2 min read | Published on 2021-10-01, tagged Darkweb-Vendor, Pleaded-Guilty using 489 words.
A Brockton man pleaded guilty to selling MDMA, ketamine, and alprazolam through the darkweb vendor account “EastSideHigh."
Binh Thanh Le, 25, pleaded guilty to conspiracy to manufacture, distribute and possess with intent to distribute MDMA, ketamine, and alprazolam. In June 2019, a federal indictment accused Le, Steven McCall, and Allante Pires of selling MDMA, Ketamine, and alprazolam through a vendor account on the darkweb with the username “EastSideHigh.” McCall and Pires have pleaded not guilty to the same charge.

EastSideHigh was a popular vendor on WallStreet Market.

The case, which this site wrote about before officials connected the arrests in Boston to the darkweb vendor account, included standard controlled purchases on WallStreet Market, physical surveillance, and an undercover cryptocurrency exchanger.
[img=]EastSideHigh was a popular vendor on WallStreet Market.[/img]

Undercover law enforcement officers conducted controlled purchases of ecstasy pills and MDMA. They observed Le drop packages off at United States Postal Service (USPS) mailboxes, according to court documents. While conducting physical surveillance of Le’s movements, officers connected Le and his alleged co-conspirators to an office space used as a storage space for drugs. On one occasion, investigators observed Le place a bag into an outdoor dumpster. The police went dumpster-diving to recover the bag. The bag contained 1,200 grams of MDMA (this sounds like an estimation by law enforcement). 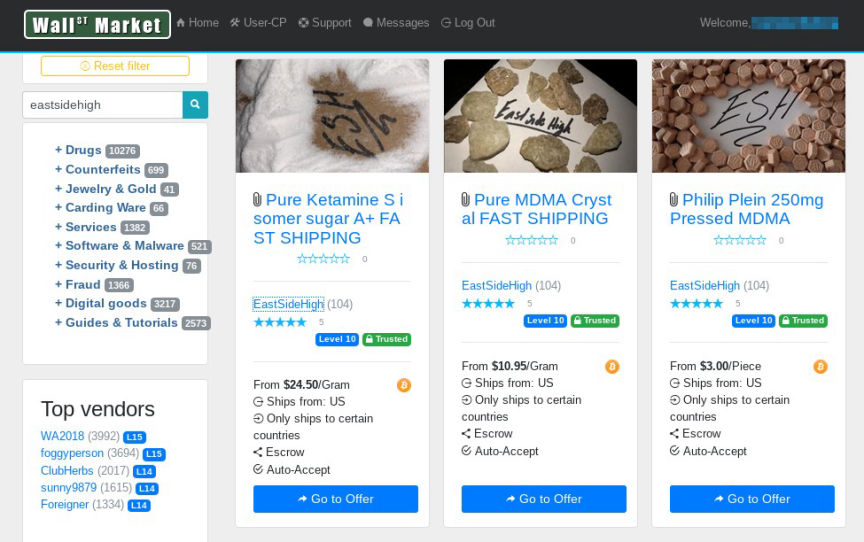 A reader matched the vendor’s listings with the list of drugs seized by police during the searches.

A Postal Inspector with the United States Postal Investigation Service (USPIS) opened a line of communication with Le concerning the exchange of Bitcoin for cash. On March 27, Le and undercover law enforcement officers arranged a meeting at a Hampton Inn hotel. Police conducted surveillance on the suspects throughout the day and determined that Pires and Le would be at the hotel. McCall, they learned, would be working in the office space at the same time. After pulling into the hotel parking lot, Le entered the hotel and Pires waited outside. “Le used his mobile phone to access hit Bitcoin wallet and electronically transferred $200,000 worth of Bitcoin to an undercover Bitcoin wallet," according to an affidavit.
Law enforcement officers arrested Le and Pires after completing the transaction. When the police searched Le, they discovered a key. The key matched the lock at the office space rented by Le. Investigators obtained a search warrant for the office space as well as Le’s home. When police arrived at the office, McCall attempted to escape through a side door. Police arrested him at the location. Inside the office space, the police found 11 pounds of ketamine, 5,000 grams of ecstasy pills, packaging materials, two digital scales, two heat-sealing devices, a pill press, and $114,700 in cash. The police seized a total of 18 kilograms of MDMA and more than $200,000 in Bitcoin by the end of the investigation.
Le’s plea agreement is not currently publicly available through PACER. McCall and Pires have very little chance of a favorable outcome at this point, if guilty.
complaint (pdf)