~2 min read | Published on 2020-02-29, tagged General-News using 399 words.
Police in the Netherlands shared new information about the most recent mail bombs in an attempt to solicit tips from the public. In addition to descriptions of the explosive devices, investigators provided the information about the specific packages mailed by the bomber.
Between late December and early January, seven businesses received mail bombs as part of an extortion plot by an unidentified suspect or number of suspects. The first seven bombs failed to detonate. In early February, four more businesses received explosive mail. Three of the bombs exploded. The perpetrator(s) also sent letters to the businesses that contained 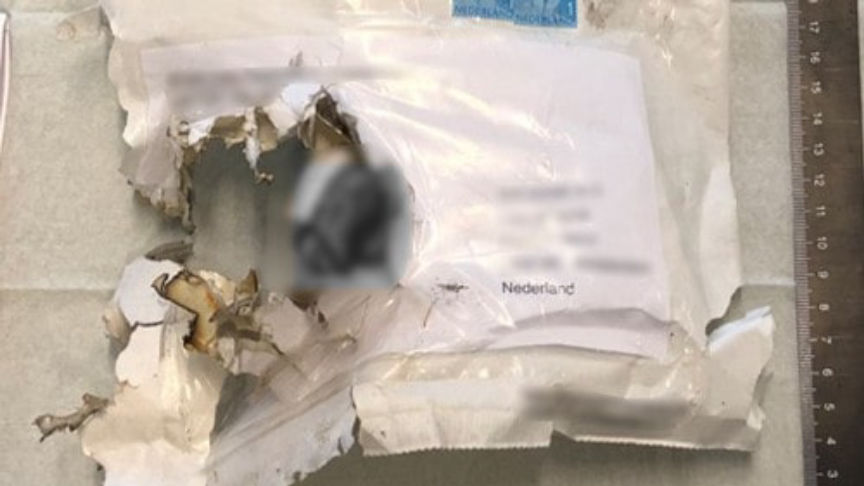 One of the package sent by the mail bomber

As a part of their investigation, the police asked the public for help identifying possible suspects. In a series of announcements on Politie.nl as well as on Twitter, the police asked for the public’s help in identifying “someone with knowledge of cryptocurrencies and building a bomb.” They also asked for tips about specific pieces of evidence such as the name of a fictional company found on the letters.

The labels implicated an innocent party

From Politie.nl regarding the pieces of mail:
Characteristics of the envelope
The envelope containing the extortion letters had the following characteristics:
- The envelope had a noticeable thickening;
- The envelope was white in color and stamped with two stamps;
- The address of the addressee and the name of the sender were printed;
- The envelope was sent on behalf of the CIB or a fictional, non-existent company.
Sender on envelope
The blackmailer placed a fictional sender on his most recent envelopes, namely the non-existent company ‘Skysence Trading’. An existing postcode and house number in The Hague were used as the address. This address cannot be shared because of the privacy of the people at the address.
The police said said they have a team of experts investigating “paper and envelopes, writing style, language, printing technology, and cryptocurrency” involved in the case. Investigators are searching for fingerprints and DNA. “All parts of the envelopes and their contents are meticulously examined with the support of the Netherlands Forensic Institute (NFI).”

Evidence shared by the police

Some forum users have suggested that the current investigation is to blame for domestic postal delays in the Netherlands. For obvious reasons, investigators are most likely prioritizing packages destined for local businesses over those headed to residential addresses.
The investigation into the packages could be an interesting one to follow; stamps are much more difficult to track than prepaid labels.