In the plea agreement, Porras agreed that if the case went to trial, the United States could prove that he had been selling marijuana and Xanax on Wall Street Market and Dream Market. His operation began in early 2017 and continued until his arrest in early 2018. Porras admitted that he had distributed at least 53 kilograms of marijuana though his vendor account on Dream Market between the dates listed in the plea agreement.
He admitted creating and using the a vendor account under the username “The Fast Plug” on Wall Street Market and “Canna_Bars” on Dream Market. Although other court documents referenced his use of the Canna_Bars account on Hansa Market, his guilty plea contained no mention of the account or marketplace.
Porras also admitted possessing a Model A uzi-style pistol; a MAK 90; and an S&W .44 caliber revolver. Although all weapons in Porras’ possession were legal firearms (the uzi-style pistol used post ban parts), a felony conviction for possession with intent precluded firearm ownership.
On December 16, 2019, United States District Court Judge Kimberly Mueller sentenced Porras to five years and 10 months in federal prison. The judge dismissed all but the charges listed in the plea agreement.
Investigation

Federal law enforcement investigated Porras as a part of Operation Dark Gold, according to a Department of Justice press release from 2018. Operation Dark Gold was a “coordinated national operation that used the first nationwide undercover action” to target darkweb vendors. The operation involved a multitude of federal agencies and lasted one year in total. At the date of the Dark Gold announcement, the investigation had resulted in the arrest of 35 darkweb vendors and their co-conspirators and the seizure of more than $35 million in cash and cryptocurrencies.
The details on how the investigation into Porras began are unknown to general public. Entire sections of the criminal complaint are redacted. Parts of the criminal complaint that detail the actual investigation are similarly impossible to read. We know, thanks to documents from other Operation Dark Gold cases, that Porras had used a money laundering service controlled by Homeland Security Investigations. Vendors sent the money launderer a certain amount of Bitcoin and the money launderer mailed cash back to the vendor. At some point in the money launderer’s career, federal agents quietly took control of the money laundering operation and used the position to identify dozens of darkweb vendors. Public information about the money laundering operation is almost non-existent.

However, the available sections of the document provide evidence reinforcing the link between Porras and the vendor accounts.
“On the Dream Marketplace, I located a vendor using the identity canna_bars. Canna_Bars registered their account on the Dream Marketplace on July 20, 2017, and offered various quantities of “og kush” marijuana for sale,” Homeland Security Investigations Special Agent Aron Mann wrote at the beginning of a section of the criminal complaint detailing the investigation. While examining the profile on Dream Market, SA Mann noticed the vendor had a verified rating from Hansa Market on the profile. Dutch law enforcement had shut down Hansa Market in July 2017 but the seized data is still available to law enforcement agencies worldwide.
In Feburary 2018, SA Mann requested any available data on the Canna_Bars account on Hansa Market from the Homeland Security Investigations field office in the Netherlands. The Netherlands field office, after gathering the requested data, the sent a copy to SA Mann. The Special Agent reviewed the profile and highlighted elements relevant to the investigation.Meth from Mexico
SA Mann included the description of a methamphetamine listing on Hansa Market in the criminal complaint. Canna_Bars, on Hansa, advertised pounds of methamphetamine. In the description of the product, Porras had claimed the methamphetamine came “direct from Mexico.” The Special Agent also pointed out that Porras had also misspelled the word “quality” in the description on a listing for marijuana on Dream Market. He provided copies of description on the Dream Market vendor account operated by Porras that contained identical misspellings.

Porras identified himself as a target of the Northern California Illicit Digital Economy Task Force in the same listing on Dream Market. He wrote,“whats up we are Canna_Bars a vendor of top qaulity weed we offer qps to multiple pounds we are operating out of northern california and have direct relationships with many growers so expect good qaulity for cheap prices.”Imgur Fingerprints
In March, while reviewing the data from Hansa Market, SA Mann found a link to an Imgur album containing high resolution pictures of marijuana. Porras provided a potential customer with the album in response to a request for additional pictures of the marijuana Porras had listed on Hansa. The imgur album appears to be this one: imgur.com/a/uy7PY. The pictures included closeup pictures of Porras’ hand with visible fingerprint ridges. 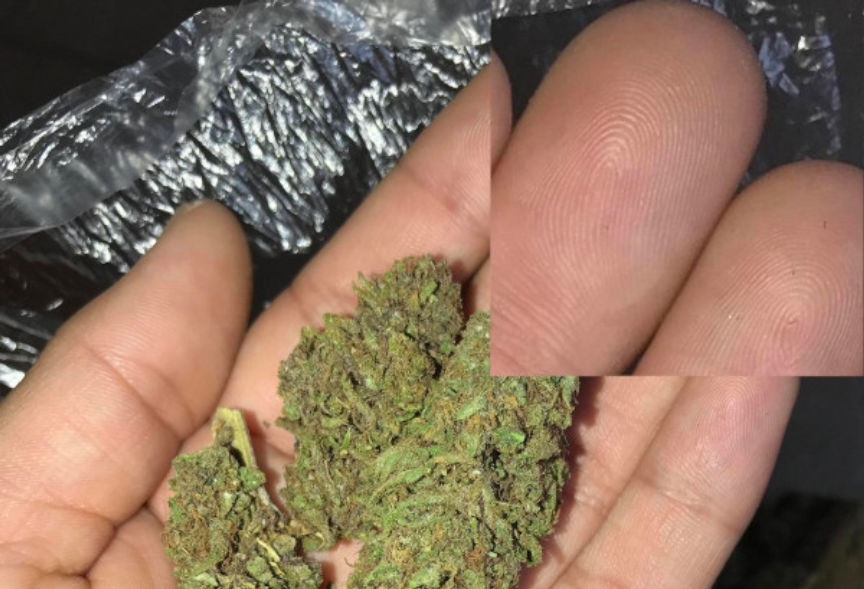 Visible Fingerprints in a Picture Posted by Porras

The Special Agent sent the highest resolution picture to the HSI Forensic Document Laboratory and requested an analysis of the prints. The FDL returned the request after conducting a comparative analysis of the friction ridge detail of the fingerprints from the Imgur album and the fingerprint samples taken after police had arrested Porras for a different crime. The fingerprints in the Imgur album matched the prints they already had on file for Porras.Undercover Purchases
Law enforcement made a number of controlled purchases during the investigation into Porras and his co-conspirators. The purchases and subsequent surveillance followed the same pattern every time: make a purchase; watch Porras drive to a storage facility where he stored product; follow Porras to the Post Office; talk to Postal Inspectors about the package Porras or his co-conspirator had dropped into a USPS Blue Box.
One example is described below:
On May 5, 2018, a USPIS Inspector and I placed an undercover purchase for two pounds of “Double Og Kush” marijuana from CANNA_BARS on the Dream Marketplace. With the order, I sent a PGP encrypted message requesting the parcel be sent to an undercover PO Box controlled by USPIS in another State.

The case eventually ended with a 16-count indictment and the arrest of Porras and his primary co-conspirator, Passia Vue. Porras pleaded guilty to a distribution charge and the illegal firearm possession charge. A judge sentenced him to five years and ten months in prison. Vue pleaded guilty to conspiracy to distribute a controlled substance. Vue’s sentencing hearing is scheduled for January 13, 2019.