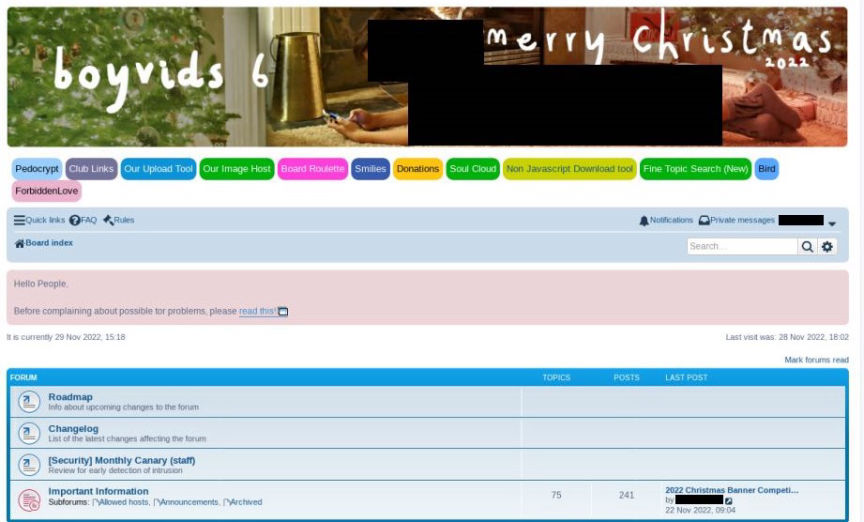 A screenshot of the BoyVids 6.0 platform by the BKA

A screenshot of the Forbidden Love platform by the BKA

In addition to shutting down the platforms, the investigations led to the arrest of four suspects accused of either being admins or users of the sites.
The main suspect, a 21-year-old man from Saxony, accused of having administrative duties on the three sites was arrested on November 29, 2022. His arrest resulted from intensive investigations by the BKA and ZIT. The investigations revealed that the suspect participated in the exchange of child abuse on the "Boystown" platform before its takedown in 2021. The 21-year-old allegedly founded "BoyVids 6.0" to succeed "Boystown".
Authorities in Germany also arrested two more men accused of distributing child abuse material on the platforms. The first man, a 44-year-old from Lower Saxony, was arrested on November 6, 2022. The second, a 45-year-old from Schleswig-Holstein, was arrested on December 13, 2022.
The fourth suspect was arrested in Brazil at the end of November 2022 and is accused of being an admin of the "Forbidden Love" darknet site.
Investigations targeting other suspected operators and users of the platforms are ongoing.
The shutdown of the sites in early December 2022, reportedly resulted in the recovery and removal from circulation of hundreds of thousands of images of sexual violence against children.
In other news, on December 19, 2022, the Dutch National Prosecutors Office (Openbaar Ministerie), sent out warning letters via email to suspected users of the now defunct dark web child abuse site DarkScandals. The warning letters follow the sentencing of the site's admin to 10 years in prison. Michael Rahim Mohammad, 35, known as "Mr Dark" on DarkScandals was sentenced in June 2022.
According to the Public Prosecution Service, the letter was sent to email addresses that had been used on Darkscandals. The letter informed its recipients that possession of child abuse material is punishable by law. The recipients were also asked to get rid of all criminal material in their possession and to seize from engaging in further criminal activity.