~3 min read | Published on 2019-08-18, tagged Darkweb-Vendor, Firearms, Pleaded-Guilty using 622 words.
Ben Handley, a 25-year-old from Homer, Alaska, admitted selling illegally modified Glocks over the internet, according to a recently submitted plea agreement. The government accused him of using the darkweb and “darkweb email addresses” to ship all least 12 illegally modified firearms to one or more customers in the United States.
The bust made headlines in a lot of local media outlets as a “darkweb gun deal” case. Even though the 15-count indictment never indicated that any of the criminal activity had occurred on the darkweb, other court documents hinted that the darkweb had some role in the investigation.
In September 2018, U.S. Attorney James P. Kennedy, Jr. announced that a federal grand jury had returned a 15-count indictment against Handley for an array of federal weapon law violations. The indictment had five counts of unlawful shipment of defaced firearm; five counts of unlawful transfer of machinegun; and five counts of unlawful transport of firearm.

Handley Darkweb Emails
[/img]
The charges stemmed from an investigation led by the same agencies usually involved in investigations into darkweb vendors: Homeland Security Investigations and the United States Postal Inspection Service. Other agencies, such as the United States Marshals Service and Alaska State Troopers also assisted in the investigation or in transporting Handley.
In early 2018, an undercover Homeland Security Investigations agent received an email from Handley from an address with the username “Abraham_Ford.69” at an undisclosed provider. I suspect that Protonmail is the provider of the email address in question. I tested this by sending an email to a known fake Protonmail email address and verifying that undeliverable emails returned a relevant 554 response. Sending an email to the aforementioned email address @protonmail.com returns no errors and is presumably a legitimate address. Furthermore, in the detention order, the government wrote that Handley had “email accounts with three darkweb sites.” Protonmail is one of a small number of mainstream email providers with an onion service.
Although the court documents provide no details about the circumstances leading up to the email exchange between Handley and the HSI undercover agent, they do note that Handley “conducted business on the darkweb.” It is unclear if Handley had listings for his modified firearms on a darkweb marketplace or had simply advertised his services on a darkweb forum. Or perhaps he had responded to a request on a forum posted by the undercover agent. As far as the court is concerned, those details are immaterial.
Handley agreed to ship a Glock 17 capable of selective fire to the undercover HSI agent for $1,000. Unregistered firearms are legal under federal law (although not in some states). Selective fire is also legal for civilians but the civilian must have a firearm with selective fire registered before 1986 or hold an FFL with the appropriate SOT. Handley’s Glock 17 was not pre-ban nor was Handley and FFL. 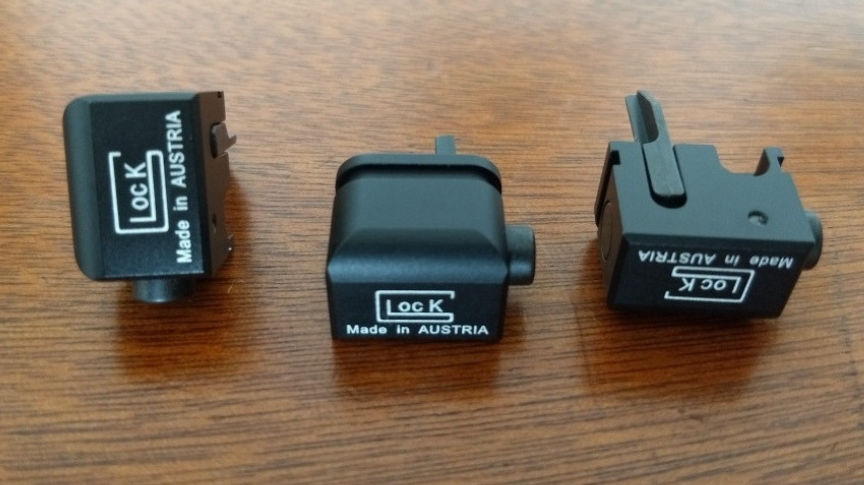 A Full-Auto Glock Backplate
[/img]
The undercover agent received the Glock in multiple packages as well as instructions for assembling the Glock. (The instructions must have been suspsciously basic for Handley to write. Converting a standard semi-automatic Glock to fire full-auto is as simple as replacing the backplate.) The serial number on the Glock receiver had been removed. Although owning an unserialized firearm (including Glock clones) is completely legal under federal law, defacing or removing the serial number from a firearm with a serial number is illegal.
Handley repeated this process 11 more times, according to the plea agreement.
The charge Handley pleaded guilty to–unlawful transport of a firearm–carries a maximum sentence of ten years in prison and a $250,000 fine. The actual sentence will likely be towards the maximum possible sentence based on the severity of the crime and the number of special offense characteristic increases outlined in the plea agreement.
A sentencing hearing has not yet been scheduled.
Plea Agreement